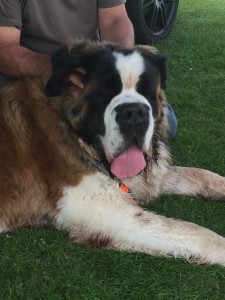 Tony a huge St Bernard weighing in at 102kgs! was on a regular and familiar walk in woodland close to home with all his buddies. Nearing the end of his walk, all his mates filed back to the van and it was soon realised that Tony was not amongst them. Where was he – how can you lose such a hug dog? But the owners had!

After many hours of searching – nothing.

It was time for Tiga to search and so we attempted a huge task to match Tony’s size! We arrived at the owners house to be met with a ‘large number ‘ of dogs that all shared the same bedding, toys, blankets – you name it they shared it. Unfazed Tiga took a sniff of the area where they roamed and the possible scrapings of fluff from Tony.

Off we set to the point where Tony had vanished – Tiga sniffed around and sat down and looked at me as if to say – nothing here. It was only about 100 metres from where the van was parked at the end of the walk but nothing. If only dogs could talk. Tiga eventually took a different short cut to the car park but on the opposite corner and the scent stopped.

We then took Tiga to where there had been reports of Tony on a busy dual carriageway. Here Tiga picked up scent and confirmed it was Tony but we had no idea how he got there as we struggled to get there on foot. Tiga tracked along a quiet lane and onto an old road with a number of businesses. We continued to a roundabout and crossed over to a regular market ground where there would have been food for a scavenger. Here the heavens opened and we called it a day.

The next day the owners had a call to say that Tony had just mooched past their office into the yard of their business in the old road that Tiga had tracked the day before. He was coaxed with water and an apple pie until owners arrived within a few minutes.