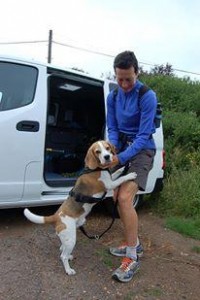 The story so far!

It was in May 2008 when a car accident ended my International Track & Field career and then I was given a beagle puppy as a special birthday present. I then decided I needed to do something to fill the gap of training twice a day and competing every weekend. I came across the sport of Cani-cross which fitted the bill. This was half way there but being a winter sport we needed something else to take care of summer.

Beagles are very special to me and when a beagle went missing in Ipswich I decided to go and help look for ‘King Louis’. After much searching during the day I decided to stay overnight and wait hoping that King Louis would return to where he went missing from. He did but he wandered off again and it was not until the next day day he was successfully reunited with his owners.

Then there was Daisy in Derby and again she was soon to be reunited with her owner and it was at a BBQ that had been put on to thank all those that had helped in her search that I was told by Phebe another dog tracker that she thought my beagle would make a good tracker dog. 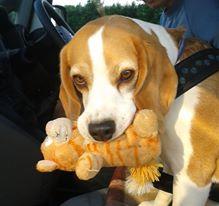 So, many questions were asked and I set about training Tiga to be a tracker dog – not to look for other people but to look for missing dogs. We had many obstacles along the way with people telling us dogs could not track dogs but undeterred we carried on. After some months of training I then looked into how we were actually going to get involved with putting this into practice and it seemed that Dog Lost was the way to go. So we registered our interest and it was not long before we had a call to say could we go and track a dog.

Then came Yogi – the half brother of Tiga.

I also decided to train Yogi despite his different personality but everyone wanted Tiga! It was only when Tiga was ill and recovering that Yogi got a chance to see how his training was going.

Yogi followed in his brothers footsteps and like Tiga found a Labrador on his first attempt that had been missing for 4 days!