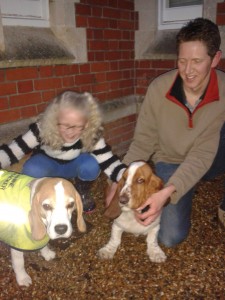 Ruby was a young Bassett Hound that ran off on a walk after being spooked by a loud bang. There had been a couple of sightings but she was very scared and was running.

After two days we got a call to see if we could help and I took Tiga to track from the last sighting which was on a busy road. Tiga quickly picked up the scent and slowly worked through the diesel fumes along this road where he then turned into a wooded copse and through to a forest but turned back eventually went back to the wooded copse. This was fairly sheltered and could possibly have been where Ruby bedded down.

Tiga then did another small loop around the area and this time went into the forest which was a huge area.  There was a national teachers strike so the owners daughter had a day off school and came with us calling for her beloved Ruby. Not long after tracking in the forest a very friendly Border Collie came to us and did not appear to be with anyone and had no collar. After a time with no one in sight calling for her I scanned her and she was microchipped, I put her on a slip lead and she was happy to come with us. After a number of phone calls to the local council dog warden we still had Ruby in tow. By 4 o’clock we had to get something sorted and as there was not a resident dog warden we called local vets who rang other local vets for us. One of the vets soon reported that one of their customers had lost a Border Collie and after checking details they were on their way to collect. I asked the vet what was the name of the dog and I was told RUBY! No wonder this Ruby came to us when the little girl was calling for Ruby her Bassett Hound – what a coincidence!

So back to Ruby the Bassett Hound – we had received a call to say that there was a sighting of Ruby on the other side of the forest in the direction we were tracking, so we quickly went back to our cars and drove to the possible sighting. By the time we got there the dog had run although the owner did manage to soon get a glimpse of her and confirmed it was Ruby. She had now gone and disappeared out of sight and it was left to Tiga to track and follow. Tiga followed where Ruby was seen to go and was clearly on the trail again heading back to the other side of the forest again but more to one side.

It was not too long before we had a call to say that Ruby had been caught by being cornered in a walled garden not far in front of us. We soon arrived and Ruby was clearly very very frightened but soon realised that she was safe and enjoyed being reunited with her family.