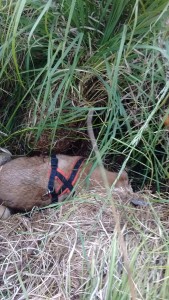 Poor Sally a 17 year old cross breed with bad eyesight and almost deaf and suffering with dementia was being walked in Ashdown Forest. She had a little walk then went back in her buggy. She then decided she wanted to get out – so get out she did. The owners mooched along with her no more than a few yards behind.

They turned round and she was gone. Thirty six hours later we were called out to help as there was no sight or sound of her despite an extensive search.

Tiga got little scent from her clean blanket and off we went with the daughter of the owner. Tiga seemed to be on a track but the daughter was doubtful Sally will have gone so far. Tiga was on a jolly when a herd of deer passed under his nose and he decided to bay at full pelt in a deafening tone.

We pulled Tiga back and started from the beginning again and after a sniff of the blanket used by all four dogs, Tiga was on a new direction but again it was believed to be too far for Sally to go.

The baying of Tiga earlier had clearly been heard by Sally causing her to bark to alert us to where she was.

After retrieving Sally from the hole and carrying her to safety and back into her buggy, she was taken to the vet and given a clean bill of health and back home for a very much needed bath.