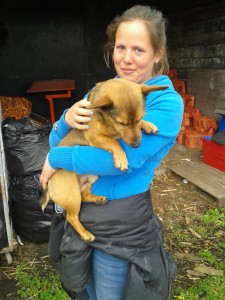 Dasher  a six year old Jack Russell Terrier Cross obviously liked a bit of an adventure but maybe this time he went a step too far. Dasher’s  ‘mum’ was returning from an event in Wales in a horse box when unbeknown to her  the back of the horse box came open and Dasher sat at the back looking at the following traffic when he decided that at 70 mph in the middle lane of the M4 on Sunday afternoon was the time to jump!

Dasher was seen to land in the middle lane and roll over several times before getting up and making his way to the hard shoulder where he legged it back the way they had travelled from.  This was seen by a number of following drivers who sped to the front of the horse box to alert ‘mum’ who pulled over and on realising what had happen and in panic also legged it back down the hard shoulder in pursuit of Dasher.  Seen by police motorway cameras that something had happened a rolling road was put in motion and as ‘mum’ continued back down the hard shoulder she was waived on by onlookers until it appeared that nothing was wrong. So at this point there was no sight of Dasher so it was hoped that he had made it safely away from the motorway and across fields.

Two days later with Dasher still on the run and the family not knowing if he was alive or not we had a panic call from Dog Lost volunteers to see if Tiga could go and help. So on Wednesday we were on the way down to track Dasher. On the way there was news of a possible sighting of Dasher on a farm on the side of the west bound carriageway. So this was the place for Tiga to start tracking from. The field was huge but it turned out to be the wrong field and on many questions to the farmer we established that the sighting was in the adjacent field and full of cows which were all lying down. As soon as Tiga appeared and attempted to track, the inquisitive cows decided to surround Tiga who took one look at them and put his tail down and ran! The cows were having none of it and we had to come up with other tactics so we decided to start tracking in the fields where Dasher would possibly have run from the carriageway on the east bound side.  Tiga quickly picked up scent and took us over a road bridge, which then explained how he had managed to get to the other side safely and to the end of this lane, turning left along the road where the farm was in but Tiga continued past the farm crossing this road to and fro several times before going into some fields and following the field edge he came back out onto the same road but further down and then across into an estate of bungalows and on to a school. Tiga then tracked across a playing field and through a gap in the hedge leading into fields which led us to the back of the farm where the possible sighting had been. The heavens now opened and it was very difficult for Tiga to continue but having arrived back at the farm it was clear that the possible sighting was Dasher and this was the route he had taken to get there.

We continued in the morning from where we left off and Tiga clearly picked up fresh scent in the neighbouring farm and took us to a barn with hay in and a shed near to where there was cat food so we were confident that this is where Dasher had spent the night and would probably return to. We asked this farmer if he would keep an eye out for Dasher in this yard while we took a look around with an aim to keep the daughters scent in the area who was with me while tracking. Within an hour the daughter had Dasher safely in her arms after picking him up off a pile of sacks in the shed!

There were tears of joy as Dasher appeared almost unscathed but very tired and subdued.

It was a huge team effort from everyone involved, from the drivers on the M4 that alerted the owner, those that searched and postered, the farmers that let us track on their land, the cat that gave up his food for Dasher and to my Tiga that quite simply gave us all hope that Dasher had made it off the motorway and tracked to where he was found.