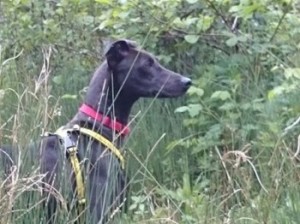 Bentley is a 6 month lurcher puppy who had been rescued by Kent Greyhound Rescue and had been placed with his new home after being looked after in a local kennel and had bonded well with the kennels. Sadly Bentley was spooked and ran off in a popular walking area close to the M20 motorway.

There had been a number of sightings but he was too scared to respond. Tiga and I were called to help having already tracked successfully another rescued greyhound from the same rescue.

On arriving I could see it was going to be a tricky situation as the owner lived on the other  side of the M20 and drove to a parking area just off  the motorway junction which was very popular with walkers.

Tiga was given a harness which Bentley had worn but sadly he was not able to get a good scent from this as many dogs had worn the harness and in fact was covered in white hairs and Bentley was black.  We then tried a duvet that Bentley had slept on but also the owners other dogs – Tiga was however able to establish which of the dogs was missing and off we went.

Tiga tracked a loop which could easily have been a route that the owner did regularly but then Tiga took us on a small loop running parallel to the M20 and eventually coming back again to the car park and then on the underpass of the M20 – each time we returned to the car park.

We asked the owner to leave her car here with boot open and we also put an animal trap by the car but it was soon clear that neither were going to work and we were where cars and walkers were constantly coming and going and so I decided it was too dangerous to pursue bearing in mind how scared Bentley was of everything and there was a danger of him being scared and running onto the motorway where he had already been seen.

While tracking Tiga had taken us several times to a small clearing on his loop and it was hear that I decided to hatch a plan which was executed to a tee and I am so grateful for the calm way in which this was carried out to ensure that Bentley was safely caught.

I will now let you read the post by Kent Greyhound Rescue who were again absolutely brilliant in their dedication in finding Bentley safely and having full confidence in Tiga.

Yesterday was both incredibly tense and very rewarding – having our puppy securely locked in the back of the van was such a relief it was surreal. Despite having a massive rural area to hide in and being terrified of traffic, puppy had taken a liking to playing on the M20 and had at one point travelled from J13 to J14 through the fields and then back up to J13 actually on the M20. The police closed the motorway and forced him to jump from the flyover – luckily at a very low point. At this point most of the volunteers were some distance away up the hill watching the horror unfold – the blue flashing lights and the puppy running up the M20 are not something we ever want to see again.

The distance he was travelling meant it was impossible for us to place a trap for him because we had no idea where to place it – a problem which brings us nicely to our first star – Tiga the tracker dog. Tiga is very famous and we have had the pleasure of working with before, we had 100% faith in his ability. We are incredibly grateful to Tiga and his his mum Jenny for their help and brilliant advice. Despite having items contaminated with other dogs scent, Tiga managed to identify the puppy scent by eliminating the other dog scent and he gave us the route. He also told us where to lay the trap which was down beside the M20  even though we had seen him sleeping up the top of the hill the day before. Needle in a haystack is an expression used a lot to describe this search – so how on earth could a beagle pin point the location from many acres of other land?

So now we know where to capture him – it’s just a matter of how to trap him as he is terrified of people. But as part of his regular route still involved a jaunt on the M20 we urgently needed to capture him before we have a major traffic accident. The trap was laid but we soon established he was also terrified of that and unlikely to go into it even for food.

Now we need to introduce Rhia, the other star now known as the dog charmer! – who most people will either know from the Conifer Lodge Kennels or from Geflon dog training club. Rhia managed to pull off the most amazing capture which you had to see to believe. Tiga told us where to place Rhia but then she was on her own – in a field, in the dark and with 100% responsibility for his safe return entirely in her hands. She managed to keep calm even when he kept going back towards the motorway and gently and calmly persuaded him to trust her. We were hidden not far away and the pressure of the situation was almost unbearable for us so we cannot imagine what Rhia was going through. In the end we didn’t need the trap – Rhia managed to win his trust and place the slip lead around his neck. Very few people would have the ability to have done this, given the circumstances and it pretty much rendered us all speechless that she pulled it off with such precision, humility and an understated sense of achievement.

We are incredibly proud of the way everyone came together to help KGR. Without everyone pulling together this could not have been possible and we will be eternally grateful to all the volunteers and supporters for their help. However the credit for such a positive resolution undoubtedly goes to team Tiga and Rhia – without actually being involved in the search it is impossible to understand what a difficult and horrific few days this has been but between them they made all this capture lark seem really easy. The odds were always stacked against us ever finding the puppy alive, so to have him back in just 78 hours is a miracle. olice closed the motorway and forced him to jump from the flyover – luckily at a fairly low point. At this point most of the volunteers were some distance away up the hill watching the horror unfold – the blue flashing lights and the puppy running up the M20 are not something we ever want to see again.