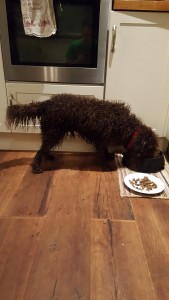 Teddy a young Goldenoodle was enjoying a walk in a big forest with his family and was spooked by a big Golden Retriever running at him and off he went Saturday morning. There were a few sightings soon after but he was running scared. The last sighting was the next morning and then nothing.

Tiga was asked to help and off we went. We started at the forest where he had last been seen and to much horror of the owners Tiga tracked across a very busy dual carriageway that took us fifteen minutes to cross and on into another forest that then led into the very busy town of Bracknell.

Teddy had only been walked in the forest about six times and always driven there from his home some 7kms away and on the other side of Bracknell.

We followed Tiga who appeared to be taking the scavenging lost dog mode but into the town we went and it appeared we were heading in the direction of home, so we alerted other members of the family that were home to keep a look out. We decided to turn back and from where we were and continue back to the forest as it seemed Teddy could either have headed towards home or back to the forest and as home was covered we chose the forest.

No sign back at the forest but soon after the owners returned home they had a call to say that Teddy had been seen in the road outside the forest and then again later. Owners returned but again nothing.

I returned with Tiga the next day and we started from the last sightings which Tiga confirmed and then crossed the road back to the car park of the forest but not to the main car park where owners had parked. We carried on following Tiga’s nose who then led us out onto the road and over a big footbridge across another very busy road and back into Bracknell – again the same scavenging lost dog mode was evident and we got to a point where we checked our bearings and we were close to where we had been the day before. It was now getting late again and close to the time that Teddy tended to be back at the forest, so we then decided to return to the forest and sit it out.

I left the owners sitting waiting and at about 10 p.m. they got the call to say that Teddy had been seen in the forest but bolted. The owners searched for two more hours but nothing and so returned back home.

Unbelievably at 5.00 a.m they were woken with a whining and scratching at the front door – it was Teddy! He had amazingly found his way home from the forest in torrential rain some 7kms from the forest and across a busy town he didn’t know!

What a pity we didn’t continue with Tiga on the two occasions we turned back to the forest !