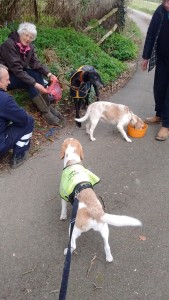 Bella a beagle was put in a horsebox with his greyhound buddy Cy at the beginning of a journey, when they arrived – there was no sign of Bella and the jockey door of the horsebox was open!

Somewhere between start and finish Bella had jumped or fallen out. There were 3 possible sightings within an hour but two were later found to be a Labrador.

Four days later despite an arm in plaster and unable to drive I just had to go and help. So I was driven down to meet the owners and Tiga was given the bedding shared by Bella and Cy and we decided to start where the third possible sighting was.

Tiga started to track but instead of turning right down a lane he carried straight on along a lane which was a footpath. We carried on until we came to a gate which we could see no way Bella would get through or under. We spoke to the owner of the house by this gate and they gave us the phone number of the person who spotted Bella but with no signal we carried on with Tiga.

Tiga wanted to go into this garden and down towards a slow trickle of fresh water and then back up to the lane and back in the direction we had come to where we started. This time we turned left and kept going until we came to a farm but again there was no way Bella could get through the gate.

We managed to get hold of the sighter and was told that the people in this farm had possibly seen Harry but we didn’t get to speak to them, so again we carried on with Tiga. Most of the lane had secure stock fencing and so there were not many places Bella could have ventured off it but Tiga had pulled us up a drive to a holiday cottage and towards a copse full of bluebells……..and there was Bella lying in the sunshine in the bluebells watching us!

Bella was safely put on a lead and I went off to find a signal to get transport to pick us up and get Bella to the vet. After a visit to the vet Bella had suffered just some very sore paws.