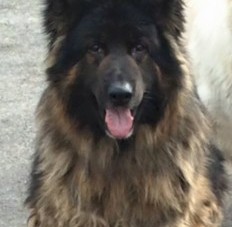 Storm a huge cuddly GSD had escaped owners garden after some fences were broken down on Sunday.
There were a few possible sightings but with such a big dog more were expected. We had a call for help and as owner was wheelchair bound and children were distraught we were on our way.
Yogi tracked from the last possible sighting and took us up and along some popular dog… walking paths through some very muddy areas where we could see a few huge paw prints. We evenually came back down and took us into Hastings old town along the sea front. As owner thought he would not be around this area now as too many people we pulled Yogi off. We took Yogi to some woods close to home where owner believed he would be hiding. Yogi clearly had the correct trail as he went to the front garden of a house next to the woods where he had been seen. From here we continued up the road past the woods and to several places where the owners children played and on to a childrens club that the boys went to.
We then got news of a possible sighting back where we were earlier and so we got there as soon as we could and spent time checking the facts and ruling out another two possible GSD’s. Clearly it sounded like Storm and so we got Yogi as close to the sighting as we could and he found a cave hidden with a mattress in. We left a small treat there and let Yogi carry on. We went back along footpaths and saw many more fresh huge paw prints, Yogi continued to find these paw prints giving each a good sniff and after doing a loop up on top Yogi brought us back down some very muddy steps with lots of huge pawprints on. We were back at the cave and the treat had gone. Yogi didnt want to stop here but pulled me through a hole in the churchyard wall, through the churchyard and towards the seafront where the steps went back up to the cave.
At this point we decided that owner should sit with some smelly food and sit it out by the cave with his family.
We called it a day so that we wouldn’t frighten Storm if he came back and owner went off to get the food and family. While doing this, there was a call to say Storm was there by the cave again! The owners shot back and as they arrived someone nearby slammed a car door and off he bolted. That was it no more sightings last night or this morning. Until………………
……..at 9 this morning two workmen down on the seafront saw Storm chase a seagull into the sea, within minutes Storm was half a mile out to sea. They called the coastguard and within 5 minutes they were on the scene rescuing Storm who is safely back home being warmed up before going off to vet for a checkup.
Thank goodness a helper had faith in Yogi and put posters up on the seafront after Yogi tracked there and gave posters to the workmen, the very same workmen that called the RNLI 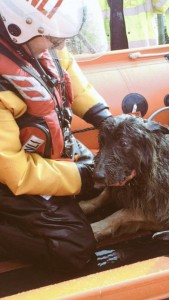