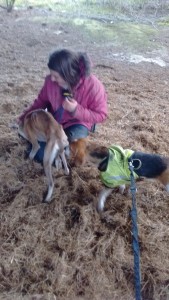 Jasper a Whippet decided to go off and play with another dog off lead while on a walk with the owner. They ran on ahead and into the bushes and brambles off the main track in a huge woodland and popular dog walking area. The other dog returned to owner a few minutes later but not Jasper.

For eight days there were no sightings and so Tiga was called into action and on arriving at the woods which were now very muddy and waterlogged we started to track from where the owner last saw Jasper.

Tiga tracked around the woods but generally following previous walks days before until he headed off out of the woods in the direction he was thought to have gone but not the way they were hoping. Tiga tracked onto the lane where cars were parked and down to the end turning right and to a busy ‘A’ road where Tiga went straight across and on down a quieter road into the town. We continued to follow Tiga who after a meander round the town took us onto the Cuckoo Trail – a popular walking and cycle path that went for miles. It was clear that this path and all the areas we had tracked needed to be postered in the hope of getting a sighting as were still eight days behind Jasper but this was clearly the way he had gone.  After about seven hours we called it a day to try again the next.

That evening the owners had a message to say that a whippet had been seen in some fields behind a service station. On looking on a map to see where this was – it was clearly feasible that it was Jasper, as the service station was very close to the woods that he first went missing on and the Cuckoo Trail went to the service area.

The next day I returned with Yogi in horrendous weather conditions that we could hardly stand up in with the wind howling and the rain descending. We parked at the services and traipsed across fields in the direction of the sighting not quite knowing the exact spot.  We came to some allotments and a track running past that came from the main road that Tiga had tracked across before but further down.  We saw a run down barn and decided to let Yogi go in to start the search – low and behold as I went in the barn following Yogi I saw some hay and curled up in a home made nest of hay was a little whippet having a snooze. I called the owner in and Jasper lifted his head and looked across at Ella, who gently went up to Jasper with some tripe – Jasper started to eat the tripe and I handed over a slip lead to secure Jasper.

Jasper was very cold and exceptionally thin but otherwise seemed very well. We carried him to teh cars and Ella got him off to the vet who told Ella that he would not have survived too much longer with his energy levels and weight.

He is now doing very well and has regained his weight.