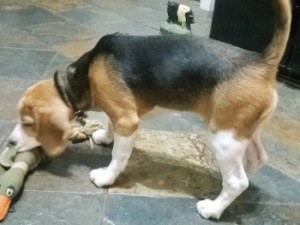 Bruno was just a young 5 month old beagle puppy  that was from the same breeder as Tiga & Yogi. I was away racing with my beagles when I got a frantic call from the breeder to ask if I could help as Bruno was missing.

It was New Years Eve and the owners were away from home on a family celebration. At five minutes to midnight Bruno and another friends’ dog were shut away in a room while a firework display took place. Fifteen minutes later the owners came back to the room to find the door open and the dogs gone.

One of the dogs was soon found outside but little Bruno was nowhere to be seen. It was not a good time for a little puppy to be running around in an area he didn’t know and with fireworks going off all around him.

We contacted the owners to try and help by giving advice as we were two hundred and fifty miles away and couldn’t get up to track until the next day.

On New Years Day the owners got news of a sighting by one of the guests as they left the venue at 12.30, soon after the fireworks. Bruno was seen running down the drive but they did not realise he was their dog. All day the owners were taking my advice and doing what they could in between entertaining guests but no more sightings of little Bruno.

The next day we were making plans to travel north but just before our race I had a call to say that they had heard a howl but couldn’t be sure it was Bruno as there was another beagle in the area.

After confirming it was not the other beagle I insisted the search continued in that area. Just before the start of my race – there was a sighting in the field in the direction of the howl. As soon as I crossed the finish line I had a call to say Bruno was safe.

He was soon back in front of the Aga warming himself after two nights out in the wild.