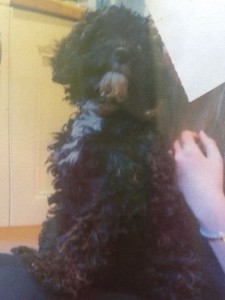 Rufus was only 16 weeks old when he was being taken by the owners disabled sister for a wee walk and was set upon by a loose dog and bolted with lead attached. As a matter of urgency for such a young puppy and with lead attached we drove down the next day to track with Tiga.

On arriving at the woodland car park where Rufus had bolted Tiga soon picked up the scent in the direction that Rufus bolted across the road and off into more woods and also to teh place of teh next sighting.

Tiga continued to track around the woods from one side of the road to the other but always back to the car park. This indicated as expected that Rufus was hiding and still closeby.  Not wanting to frighten Rufus in the dark as it was now and very late we called it a day .

Owners were going to ‘camp out’ in the car park and were ready to call it a night again when the owners son who had been helping returned to the car park with Rufus who had run out into the road in front of him just down the hill from the car park. He safe and well and none the worse for his adventure.