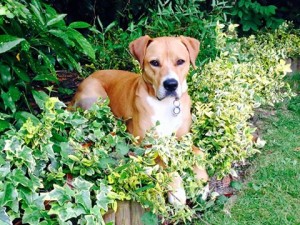 Maisie, a Ridgeback Cross was being taken to the vet for a check up on a recent operation when she slipped her collar while being taken out of the car in the car park of the vets. She was originally a rescue and so very timid.

Owners were away on holiday but cut short their trip when they heard that Maisie was missing.

Tiga was called in to help track and we arrived at the vet and picked up the scent from where the daughter had seen Maisie crossing the yard of the vet. Tiga with nose to ground took us along a track and to a game keepers cottage where she had also been seen. We continued to follow Tiga across some fields and along a road and into fields on the opposite side of the road eventually coming back to the car park of the vet via a small track through a hedge. So it seemed that Tiga had defined the loop that Maisie had been doing.

Maisie’s bed and toy were left in the car park of the vet and several BBQ’s were had .

Tiga and I returned the next day and met with the owners who were now home from their shortened holiday. We set off again and this time we were taken on a similar loop nearby when we got news of a sighting – so we quickly got to the footpath she was seen to be heading down and let Tiga follow the scent. It seemed the path was going to take us back along the path where we were yesterday and then across the road to the vet. I suggested that the owners got ahead of us and sat on the path between the road by the vet and where we were heading. Soon after Maisie trotted quite happily along the path and past ‘mum’ who was taken by surprise. Maisie did not get as far as ‘dad’ and so had obviously gone to ground. This particular field was where there also had been a possible sighting days earlier, where Maisie had been in a garden playing with some dogs and children.

We called it a night so as not to chase Maisie onto the road which was now getting busy with the rush hour.

The owners went back to the house where she had been playing to advise them that Maisie was still nearby and that Maisie loved other dogs and children.

In the morning the delighted owners had a call to say that Maisie was in the garden next door playing with their two dogs.

Apart from being quite thin and limping on her leg she had had the operation on she was fine and was soon back to being a picture of health.