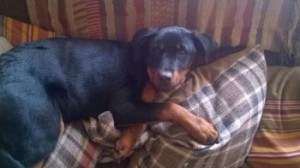 Prudence was a young 9 month old Rottweiller cross Doberman who happily enjoyed the freedom of the family farm which was secure.

Sadly a visitor entered a gate and left it open allowing a young explorer to escape. For twelve days there were no sightings whatsoever despite huge searches and a poster campaign etc.

We were contacted for help and we travelled to Somerset to do our best. As soon as we arrived we set off with Tiga mooching around the farm picking up scent before she vanished . We did a loop coming back to the farm which was probably her usual walk. We then picked up more scent and went through the gate that had been left open.

We followed Tiga as he took us left down a farm track where he sniffed and then turned back continuing along and onto a lane and again he sniffed and turned back. This time we turned into the farm yard and across where the cows had just come from the milking parlour and returned to the field so I was amazed that Tiga had managed to track through this strong cow smell even after 12 days that Prudence had been missing. We arrived at the back of the farm and across a small grassy area to the worst nightmare – a huge open slurry pit.

Tiga sniffed along the edge and then slightly down the bank and looked across to the middle with his nose in the air. He then sat down and we looked at where he was looking and there in the middle was some kind of animal rising above the surface with gas bubbles rising.

We returned to the owners farm and spent probably an hour inventing a long enough gadget that we could use to retrieve what we believed was Prudence. With great carefulness we managed to drag the body of this animal to the edge and yes the worst fear was confirmed.