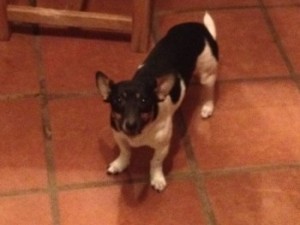 Jess was a very small Jack Russell that escaped down the drive and through the gate when a visitor left the gate open.

Someone suggested that we were called in to help and so we did and Tiga tracked from the gate and across to the golf course opposite. From here we went across the golf course and out through a small gap in the hedge the other side and on down the road to the local open prison where we had to get permission to track in the grounds . After a tour of the gardens we carried on back out to the road and along the road until we came to the local village via footpaths across the fields. We followed Tiga as he tracked around the village and through some woods but eventually was heading back towards home but not quite making it and we called it a day.

We tracked like this for a number of days and covered a number of miles around the village and through the woods but each time seem to head back in the direction of home covering similar routes each time but in slightly different directions.

This went on for days and weeks and then on one occasion Tiga tracked back along the road to the golf club and only 100 yards from home the scent went cold.

We spoke to passers by asking if they had seen a small Jack Russell and one local couple said – Oh I thought you had your dog back, we saw a young couple stop in a van and pick her up, they asked if anyone had lost a dog and we pointed to your house, they said they would go and knock on the door but they didn’t.

Tiga returned to a possible sighting some days later but did not pick up any scent. It now looked as if Jess had been stolen by theft of finding.

The family were heartbroken and as time went on there was no news on Jess, until……….. 15th  May 2015 some 14 months later I had a call from the owner to say that Jess had been picked up some 60 miles away and taken to a vet, where the microchip revealed it was Jess!

Jess was soon reunited to a very happy family and I have just got back from having a big cuddle with Jess.

Never give up and make sure your beloved pet is microchipped.