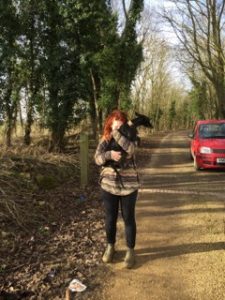 Maya came from a good stock of racing whippets and knew how to run! She was with her owners who were away from home on a course. The morning walk was the start of an adventure for Maya as she set off on her own course and three days later was still running.

I got a call to help and I took Yogi knowing that he can track at a fair pace and just keep going. We started at where there had been the last sighting thirty six hours before but Yogi didn’t want to go in the direction that Maya was seen to go. Yogi wanted to go in the opposite direction and as she had been seen in that direction before, we went with Yogi.

Yogi’s nose was down with no hesitation and he took us to all the previous sightings and in order until we arrived back at a main road and Yogi wanted to turn right again away from where it was believed she would go. Yogi went on and on and on in a huge loop to the next village, across fields and eventually Yogi started to head back in a continuation of the loop towards where Maya had first run from. We were on a track and as we approached a road Yogi wanted to turn right but after some 20 miles the owner could go no further and her partner took over. Yogi took us back to the large garden where the course was being held and took us to a cosy corner where there was a bed of leaves moulded to Mayas size. On we went back through the gardens and down the long drive of the country residence, out onto the road turning right and arriving back on the road where Yogi had wanted to turn right.

We were all tired and hungry and called it a night but the next day we had a call of a sighting of Maya in the garden just 200 yards further on from where we stopped.

The day continued with many more sightings in the field where Yogi had tracked to the day before and it wasn’t long before Maya was cornered in a chicken farm at the edge of the field.

I am not sure who had more stamina Maya or Yogi!