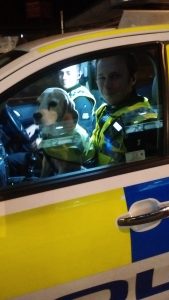 Hazel left home with her little poodle cross Bertie for their daily walk on Minchinhampton Common but did not return home that day as usual.

A huge nationwide search was carried out involving the Police both on the ground on horseback and overhead, SARA, Fire & Rescue, the family and many members of the public. There were no sightings of either Hazel or her dog and we got a call by the police to see if we could track Bertie as it was expected that they would be together.

We arrived late afternoon and set off with a police constable accompanying myself and Tiga from the house where they had started their walk.

Tiga immediately took us through the back gate and out through a gate out of the small development and onto the footpath. We went down a small lane behind the house and onto a track and after a short while Tiga looked a bit confused but after a few moments decided to back track and picked up another route going back towards the other side of the development and out onto the road. After a while we were on a main road with helicopter above us and we were clearly heading away from the direction of the Common. We relayed a message back to the services to look out for a dog and the lady separately because it was clear that the two had not done this route together. We went for 3 or 4 miles and to the next town when the constable I was with got a call to say there had been a sighting of a lone black dog. By the time we got the location of this sighting Tiga had actually taken us to the park where this sighting was only two hours before. It was highly feasible that this could have been Bertie as we had been told that Bertie had a habit of running off although not far.  While tracking along the road we met a cyclist who told us that his childminder met the two on the Common every day while walking her dog – but she had not met them the morning of the disappearance.

It was now very late and all services had stood down calling it a night and so we did too.

The next morning the search was due to continue but an early morning dog walker stumbled across Hazel and Bertie huddled together in some woods and they were both safe and well and reunited with the family by the Police soon after.

The location that Hazel and Bertie was found was only 0.8 miles from home but down the track that Tiga first took us on before he got confused and turned back and I believe that it was this point that the two parted company and Tiga continued with his task of tracking Bertie. I also believe that Bertie continued on his loop which also led back via the Common to the same place and I believe that it was here that Bertie found Hazel and they stayed huddled together until found.  When the Police arrive at the scene Hazel spoke about nothing else but her lost dog!

This is my version of what I believe happened and in my mind why else would Tiga track from the house to the sighting of a lone black dog but who knows and the most important thing is that both Hazel & Bertie were safely found and soon back with the family.