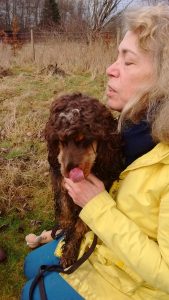 Hetty – you certainly gave us a run around after running off chasing a rabbit on Sunday. It was Yogi’s turn to come and find you.
After getting a sighting on Monday morning things were looking good and Yogi immediately picked up on the scent and the fun began. Yogi took us along bridle ways and onto roads into fields and back out through hedges and into woods – back onto a road down another bridleway and on and and on to a golf course – despite the rain and torrents of water… rushing down the roads – Yogi didn’t give up – although we thought he had. Eventually we called it a night – soaked and laden with mud.
On returning home we heard of two more sightings both of which tied up with Yogi’s adventure!
Today was another day and no sooner were we on our way back to pick up from where we left off we got news of another sighting and eventually we got the facts and location and put Yogi in the drive of the house. Yogi went through the garden and out through the back – through brambles and onto the Cuckoo Trail – left we went. Yogi was on a hot scent but…….. we got news of another possible sighting and it seemed it was after this one. With much investigation and 2 hours wasted it turned out to be a neighbours dog, so we put Yogi back to where we left off but he was bored and not interested as we had pulled him off.
We then had news of yet another red herring and wasted time but eventually we had a call that was good news.
Hetty was in someone’s garden – we were on our way – the garden was huge and Hetty was not wanting to be caught by the owner of the house who did everything right and sat quietly just watching her until we arrived.
Giving Hetty’s owner advice on how to encourage Hetty to her – I watched from a distance whispering as we went along and after some 15 minutes Hetty got up and trotted along to owner with wagging tail.
If we had continued with Yogi along the Cuckoo trail in the first place to the road and turned left we would have been a few houses away from the garden!
Apart from being very stinky – Hetty was in great condition after her adventure