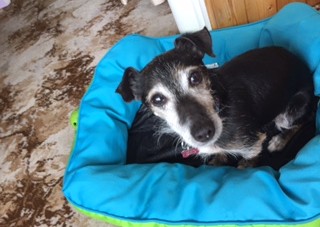 Martha is an elderly terrier cross that was being walked on lead by her elderly owner on a footpath across a field. Soon after the owner was trampled on by a herd of cows and it was later found out that there had also been a bull and calves in the field as well despite no warning signs either end of the footpath.

The owner suffered broken ribs and severe head injury and was believed to have laid unconscious for half an hour before getting up and somehow getting himself across the field and eventually to a road where he was picked up by a passing motorist and taken to hospital.

Martha where was she – there was no sign and she had her lead still on her. Had she survived or had she too been trampled on?

There was no sign of her body so we had to assume she had got away.

I could do no more than advise until I was able to get up to the north east to track but fortunately the owners and neighbour were prepared to listen and take advice.

I explained it was so important to try and find out where the owner had been picked up on road side and after he had been discharged from hospital, he was able to be driven around and slowly they managed to piece together the exact spot he was picked up.

This is where Martha would have also made her way to if she were able and would have stayed close to here and returning regularly.

I also gave advice on where from here that Martha would have travelled and sure enough, a week later I had a call from the neighbor who had been helping to say that I was spot on and Martha was found in a barn just down the road from where the elderly owner had been rescued.

Martha was fine just a little slimmer and still had her lead on.