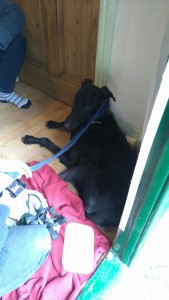 Joss was a very happily rehomed Greyhound from Kent Greyhound Trust and was on a walk on lead with the owner not too far from home just before Christmas. An off lead dog ran at him and he spooked and bolted pulling the lead from the owners hand.

Owner was due to go on a family holiday overseas but cancelled to find her much loved dog.

There were a few sightings and while a car nearly hit Joss and then reversed onto his lead trying to avoid him, the lead was caught under the tyre of the car and Joss broke free again from both his harness and lead and ran scared.

There were now no sightings and Tiga was called in to help track Joss. It turned out that Joss was the litter brother of another greyhound that Tiga had successfully tracked and reunited a year ago with the help of Joss!  It was now the turn of his brother to be called back to try and coax Joss back.

We arrived at the owners house and using the harness that had Joss had pulled free from for Tiga to get his scent, we set off from the last sighting.

Tiga was quickly on his trail and took us up and down a road that Joss had also been seen to go up and down and so we knew Tiga was on the right track. We continued to follow Tiga and eventually ended up near a school where there had been a possible sighting of a black dog but it was not confirmed that it was Joss. Tiga clearly confirmed that it was and so on we went along a busy road crossing over and on towards a huge outdoor retail shopping centre that was heaving with Boxing Day shoppers. In and out of the public we went, Tiga was undeterred he was on a mission.  Tiga took us into an empty shed that had the door open and was down the middle of a shopping mall – maybe Joss had slept there the day before. We later spoke to security and that particular shed had been used to despatch Christmas turkeys to the shoppers on Christmas Eve!  Joss would not have done  ventured into this shopping centre on a busy day like this and we suspect he was there the day before Christmas Day when it was quiet and closed.

Tiga didn’t stop for anything or anyone and took us to the rubbish bins behind Marks and Spencers and then to a number of pubs/ restaurants within the centre before finally going to the Toby Inn where Tiga spent much time circling the car park and bushes before going off again on another circuit and returning to the Toby Inn.

We decided to call it a day as clearly Joss was not going to show himself in such a busy area. I got the owner to return with posters and she got a sighting of Joss on a farm immediately behind the Toby Inn! So I then asked Jill to scent from their back home.  Lots of posters were put up on the route leading home and a day later a number of sightings came in. I returned with Tiga and as I arrived at the owners house again – there he was, looking up at home! Unfortunately he was being chased and off he went.  We quickly got Tiga back into action but within minutes we had a call to say that Joss had run down a dead end and thumped against the door of a house which alerted the occupants and there he was – given himself up.

After a trip to the vet with some very sore paws and a little lighter he was home and back in the dry safely with his very relieved owner.