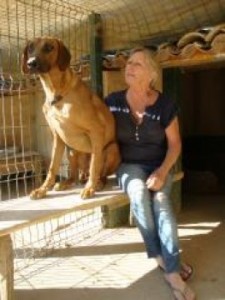 Leo is a rescue Rhodesian Ridgeback from Portugal who had spent two and a half years living with Ruth in Portugal and when Ruth’s brother in the UK recently lost his own Ridgeback, Ruth brought Leo to the UK to live with her brother.

After only five days on returning to his new home after a trip out in the car he bolted from outside the house as the door was opened and with his collar and harness still on and with lead trailing.

There were a number of sightings over the first couple of days and then nothing for five days. Owners were desperate to get a tracker in to help and so we agreed to help.

We arrived and together with Ruth who had flown over to the UK as we believed Leo would recognise her and being a Ridgeback would more likely go to Ruth than anyone else.

Tiga did not have the best scent item as it was a blanket that had belonged to the owners previous Ridgeback and was then washed and Leo had used it for five days before it was put out in the rain to entice Leo back. However after a good sniff we set off from near one of the sightings.

Tiga certainly got to work quickly and confirmed that this first sighting was that of Leo. Tiga continued on for miles as you would expect with a Ridgeback and took us in turn to each of the other sightings including one that was not expected to be Leo as it was the other side of the railway but Tiga showed us the way he had travelled along a road and under a railway bridge.  We continued on and on and eventually arrived at a quiet lane that took us back, this time over the railway. We fully expected to take a footpath across some fields on the other side but no, Tiga kept on the lane and eventually turning down a farm track and arriving in a village where we took a well earned rest with a swift drink in the pub on the green giving Tiga a breather before picking up on where we left off.

Tiga kept up the work and we were soon back very close to where the owners lived but instead of making it all the way home, Tiga turned right and through a gate onto a path that Leo had previously been walked on. Before we turned we noticed a huge barn full of hay bales and it was the first place we had seen that Leo could have taken shelter. We decided not to enter as there were sheep in the field and electric fence around but we stood and looked around. We continued on the footpath across fields until we arrived at a large estate and garden centre and from here back onto another footpath through some woods until we arrived very close to where we started, less than half a mile from home.

We decided to call it a night and that the search should continue close to home as that is where Tiga has indicated Leo was. We had covered 15 miles following Tiga’s nose and were due to return two days later if Leo was not home.

The next day Leo was found by Ruth in the field with the sheep and absolutely frightened of them, still with lead trailing as he had on all the sightings. Apart from losing some 10kg of body weight he was very happy to have been found.