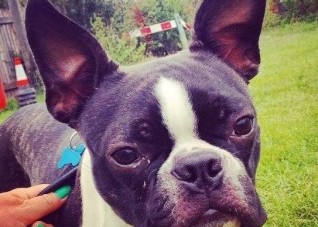 I was out walking my dogs when I had a call from one of the nurses at my vet, my immediate thought was oh help I have forgotten an annual booster but no it was the best friend of this nurse that had lost her dog and could I help.

I quickly got my dogs home from their walk and ventured out with Tiga.

Frankie was a Boston Terrier that had just had his lead and collar put on for the last walk around the block before bed. No sooner was the front door opened and he was off – he had seen a cat go by and that was something to chase.

Friends, family and neighbours immediately joined in the search well into the night to no avail. The search continued the next day and there was no sign of Frankie who was still trailing his lead when he chased out of the front door.

When Tiga arrived there still had not been one sighting but he soon picked up a scent and off we went. It appeared that Tiga was at this point following the scent of a normal daily walk and we soon ended up back at the front door but Tiga continued on his travels with nose to ground and carried on past the door and across the neighbours garden – clearly not the daily walk.

We soon got to a footpath and turned left and followed the path round to the right stopping to sniff at a pile of rubbish where clearly some easy pickings were there to be had.  Having sniffed on past the rubbish Tiga went into a parking area behind some houses and starting heading towards a back gate swinging in the wind and there with head half in and half out was Frankie still with lead attached.

He soon recognised his ‘mum’ and came bundling over giving Tiga a lick enroute.

His lead was wet and muddy but Frankie looked none the worse for his night out on the cat walk.