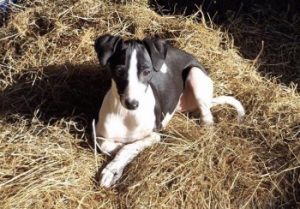 So this morning I was asked to help with a 17 week Italian Greyhound on its way to a forever home in Scotland from Wales.
The pup ‘with no name yet’ was travel sick and owner stopped at service station in the Midlands to clean her up – but she bolted with lead and collar attached!
Before I left we heard of a sighting at 9.30 p.m. last night and after deciding it was in a safe place with familiar surroundings to the pup, instead of tracking it was a case of putting a plan in …place to catch her.
I quickly found out about the breed and after seeing an offer from an Italian Greyhound Rescue to take 2 calm IG’s to the farm, I contacted lovely Jo who was happy to go to the farm.
We asked everyone to stand back and insisted that a trap was not set but to allow the fellow breed to encourage her to them.
Within a short while of Jo arriving and hearing of another sighting at the farm – Jo walked around the farm and heard a whine in a building. She put one of her 2 IG’s in the building through a small hole and the pup came out with her. Very happy to be caught. Jo’s words were ‘Oh Magic!’
Unbeknown to everyone I had already advised that the owner started his journey back to the service station from Scotland as despite him only being with the pup for only a couple of hours it was more than anyone else and he arrived minutes after pup was caught!
Pup has now continued on her way to her forever home with two other IG’s waiting for her.

She has happily settled in and has been called Magic!