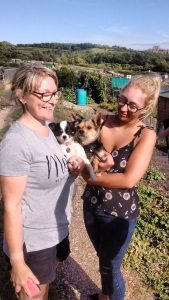 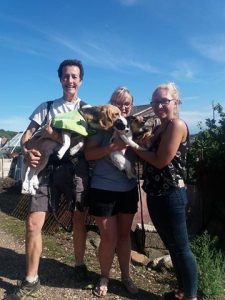 Coco a Chi/Yorkie cross escaped on the 8th June and gave everyone a good run around for 8 weeks but it wasn’t until the last 3 weeks that I was able to help.

Firstly Tiga went out to track on 3 occasions and posters went up where he tracked and we got more sightings on his loops but Coco was moving fast and covering some miles.
So many people knew about Coco but he was too quick for everyone. The last time Tiga tracked we actually saw Coco within moments of us starting to track but he was on the other side of a busy road and we had to let him go on his travels as it was too dangerous to take action.
Over the last 8 weeks there had been sightings and so many people had been helping and hoping for a happy reunion but today there was a call of Coco being in an allotment in Dover and so I jumped in the van this time with Yogi and off we went to the allotment and met Zoe the owner again. Yogi got the scent and off he went and within less than a minute Yogi and I were staring Coco in his eyes. He was in a poly tunnel on top of the onions – we quickly shut the doors at the front but weren’t quick enough to shut the back doors and Yogi confirmed he had escaped but Yogi was still on his trail. There was then another sighting ahead of Yogi but Yogi was starting to pick up previous days scent, as we soon learnt that Coco had been in the allotment for a number of days.
It was time to chill as we were confident that Coco could not escape the huge allotment as Janet was manning the main gate and Yogi had not found any other way out.
It was about 2 hours later and while I was now carrying Yogi as we had leant there was rat poision in some places of the allotment and I had to protect Yogi from it, that Yogi was suddenly very determined to get out of my arms and down on the ground – so I put him down and he was off with nose to the ground up a very grassy plot and through some fruit trees and round and back – Ges then pointed to a place some 20 feet ahead of Yogi’s nose – we stopped and watched keeping our eyes on the spot.
I called Zoe on the phone and gave her instructions to walk slowly towards us and sit down – we remained on the phone while I advised her on what to do. I asked her to sit down with her back to a shed and let Princess off the lead. I continued to give advice until I said down the phone ‘What is Princess playing with?’ Zoe turned her head to see Coco jump in her arms.
Well Coco we eventually got you home before the family wedding tomorrow but looking at these photos I think the wedding should be for Coco & Princess.
Well done everyone in the local communities that all played a part to get Coco home eventually!
Great to meet you Ges from Paw – Helping Dogs in need you have finally seen both Tiga & Yogi track.
Now I know that not only can Tiga ground scent and air scent but Yogi – you have proved you can air scent as well!