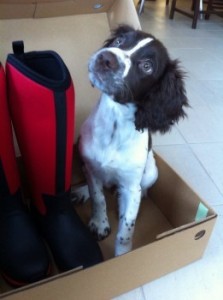 Pip a springer spaniel  at just  17 weeks old was being walked early one morning off lead with the other family  spaniel on the beach. At some point Pip just vanished despite being close to owner.

Extensive searches of the surrounding areas, a poster campaign, media campaign revealed nothing.

Four days later we were contacted to help and we duly obliged. I met the owner with Tiga and were given the scent item in the hope of some good news.

Tiga tracked along the beach but went behind some beach huts close to where Pip vanished and this appears to be where Pip and the owner parted company as the owner had walked in front of the huts.  We carried on down the beach and over to the car park where owner had parked to check the crate and bedding that had been left.

Tiga then picked up the scent again and on further down the beach along the promenade and up some steps leading into a building site where storm damage was being repaired.  The steps went no where as there was Herras fencing  across the broken steps and no way through although Tiga wanted to continue at first but he turned back and back onto the beach  tracking to the section between the last two breakwaters.  My heart sank as Tiga tracked down towards the sea and actually into the sea where I could see strong undercurrents. There were also signs up saying Danger bathers keep away.

Although Tiga continued to track it seemed more a case of searching than tracking. We tried different places beyond the promenade and under bushes eventually going back to where we started.  Tiga then picked up scent near the swimming pool and going round the building to a locked gate which we couldn’t get through but Pip could have done. We tried to pick it up the other side but no joy, probably because Tiga had air scented through the gate and not ground scented.

With no sightings there was nothing more we could do except to make Pip too hot to handle.  Everyone knew about Pip and were all looking out for her.

Two days later there was news of a possible sighting but unfortunately only about two hours after she first went missing and in fact in the direction of where Tiga was air scenting.  With a huge search planned we decided to go back down to try and pick up from this sighting. No sooner did we start to track, we had a call with the worst possible outcome.  Pip had just been washed up on the beach a few miles down the coast from where Tiga tracked into the sea.

Run free Pip you stole so many peoples’ hearts and although so young you left a huge impression on us all.