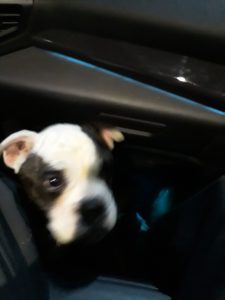 Bandit a sweet little Staffie/Frenchie cross was spooked while with dog walkers last Tuesday and bolted in Mote Park a huge dog walking/country park. He still had his lead attached. There were a number of sightings but no specific points to track from.
On Thursday I offered to help and with Tiga and Yogi defining the loop but in general Bandit was staying very much in a close area.
Even a nasty dog bite (requiring a trip to A & E) in the search for Bandit was not going to stop me searching for Bandit
We were in the Park from 6 am each morning in the hope of securing him before the park got too busy and then again in the evening determined to find the little man – we were gutted to see head torches there before us scouring the under growth and yesterday we had no sightings.
But on our way back to the park tonight we had a call to say that someone heard something in the dense undergrowth and when they threw treats in they thought they were being eaten. The area was where we were concentrating our search and so it seemed feasible.
We rounded up a group of helpers to circle the undergrowth to watch for any bolting as we knew that Bandit would not bark or give any indication he was in there. We guessed in that dense bramble his lead would be caught and we had no choice but to go in.
Keith the owner was shredded to bits but right in the middle was Bandit.
Once brought out to safety he was happy to play with his toys and skip and play back to the car and jump in the boot – seemingly none the worse for wear – just a little thinner.
Keith – I am sure it was worth turning back from watching Millwall and Derby!
Well done everyone – great team effort