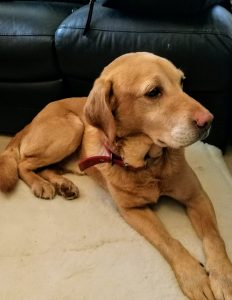 Fin  a 7 year old Yellow Labrador had recently been rehomed to a lovely couple who dearly loved him and it was unfortunate that Fin was spooked by two over playful dogs while on a walk.

With only one sighting after three days I took Yogi to track and while on our way we heard about another possible sighting and so had a starting point. Yogi was onto it straight away keeping his nose down for quite some distance and showing us just how fit Fin was as well because where Fin was unable to get round or under gates, Yogi indicated he had gone over and was desperate to do likewise.

However there was one gate that Yogi did not want to go through and it was a gate that led out onto a lane – he did however want to go into a back garden but with a sign saying – Beware loose big dogs, we decided not a wise move despite there being no one at home. A poster was however later delivered to the house. It turned out that the owners had been away and so in fact the garden was empty and quiet.

We then went out onto the lane much to Yogi’s disgust – he did however pick it up again later on and eventually ended up back in the woods where he had originally run from. This being where I always believed Fin would return to.

After checking out the first sighting we were able to pretty much put together Fin’s loop. Having advised the owners to keep going back to the car park to sit and wait – they did just this and it was only soon after they left last night that they had a call from a lady who lived in a house opposite the car park to say that their security light came on and when they looked out they saw Fin trotting across their drive.

The owners arrived very soon after and as they approached the car park with only sidelights turned on they saw Fin and with a whistle and a few relevant words – Fin bundled towards Tina for one very happy reunion.