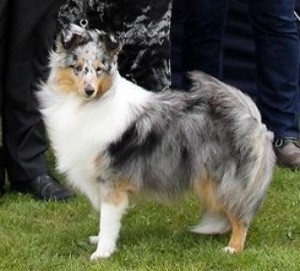 Ricky a world class Sheltie show dog was being transported from Ireland to a show in Spain and had just travelled through Eurotunnel to Calais when he was let out for a wee and slipped his collar at the service station causing an alert on both sides of the channel.

The owner soon flew to Calais to help in the search but with a few sightings it seemed it would not be long before he was caught but Ricky was running scared. He had been seen back at the tunnel near some staff offices and scavenging bins.

Two days later and Ricky was still on the run but appearing to stay close to the offices and car parks.

I was on my way back from tracking a dog in Cornwall when i was alerted and pulled off the motorway to speak to both the distraught breeder and owner. I was willing to travel to Calais if necessary to track as Tiga already had a pet passport but in the meantime I was able to offer some advice on how to catch a dog that at this stage was unwilling to be caught even by the owner.

Within an hour I had calls of tears of joy from both breeder and owner to say that Ricky was safely back in his arms and that the advice given had worked.