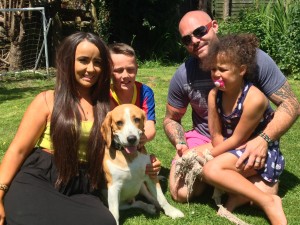 Fudge was a beagle that managed to escape the garden and then there were reports of being hit by a car the same evening and then there were no more sightings. Two days later I arrived with Tiga in very hot dry conditions which is the worst for tracking as the scent dries and the heat is not good for Tiga to be out working in for too long.

We parked up in a garden centre on the road where there had been the possible sighting of being hit be a car and then running scared. Tiga was given a scent item and we set off expecting  it to be a very difficult time tracking along this very fast main road. As we set off I asked one of the owners to call in at the cafe next to the garden centre to ask if anyone had seen a beagle running loose.

Tiga quickly picked up the scent and instead of going along the road we went across it and down a much quieter lane heading towards an abbertoir. We were soon caught up by the owner who declared that someone in the cafe had seen a beagle running loose and headed in the direction we were going! Tiga soon went into a field moving away from the abertoir which was quite a relief. He spent some time clearly tracking around this field and then came out onto a track heading towards some fishing lakes. We crossed over the track and into another field and I was confident that we were on Fudges heels because apparently Fudge does not like going under anything and each time we came to a gate or barrier Tiga sniffed the normal option but on each occasion Tiga went around the edge! We were now on a long grassy track through some trees which was a little cooler and here he had a good sniff of a beagle sized flattened area of grass where Fudge could possibly have bedded down on  A little further on was another area of flattened grass but much bigger and Tiga took no notice.  We carried on following Tiga’s nose and we came back out onto the track turning towards the fishing lakes . On arriving at the lakes Tiga had a good sniff around a very dry area leading into some more fields and lakes.

It was here that we stopped to ask if any of the fishermen had seen a loose beagle running around, they alls aid no except one guy who turned out to be the lakes manager and he said he had but had thought it must be with someone as there was a footpath running through.  He showed us where and it was the exact spot that Tiga had taken us to. This was only an hour earlier. It was with great relief that it appeared that Fudge was in the area and ok. It was now extremely hot and Tiga was struggling to stay cool. So we rested him for a little while before resuming.

After a rest and food Tiga continued to track around the area but the dryness was making it so difficult so we called it a day but we decided to have a BBQ hoping it would draw Fudge out. Sadly Fudge did not come to join the BBQ and we had to leave when the lakes were locked for the night before 9. I asked the owner to come back at dawn and again at dusk as Fudge was clearly close by.

There was nothing in the morning but that evening after dark two sets of  eyes were seen, the first belonged to a fox and the second were those of Fudge who came whimpering and crying across to the owner at the exact spot that Tiga had tracked to the day before.

Fudge was taken to the vet and apart from a few scratches and very sore paws he is fine and very happy to be home again.