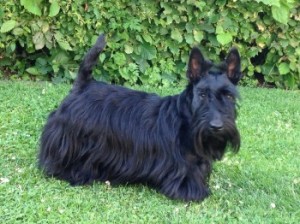 Beanie was a black Scottish Terrier that had followed its 2 playmates through a hole in the garden fence and had been missing for a few days now. Her two playmates had been picked up later the same night in the nearby village and safely reunited but there was no sign of Beanie.

The great fear was that this breed are drawn to water but cannot swim and there were a number of ponds in the area but they were all checked as best could be.

After a few days we were called to see if we could help and track Beanie so off we went and quickly picked up the route that Beanie had taken but sadly the owners had been asked to scent the area with the contents of the hoover bag which clearly didn’t help Tiga. Tiga however did take us on a route round the rape and corn fields and off to a farm and along a hedge but the owners not believing she would have travelled so far we turned back and continued to try and find scent in the rape fields. After a long hot day tracking we called it a night and returned in the morning to check out a few more local areas  but Tiga did not find any new scent.  So we finished by searching a 50 acre field of rape which was chest height but again no sign of her in there.

The posters continued to go up in the hope of there being a sighting and the ditches were extensively searched but still no sign until the call was received from a local land owner to say that sadly he had found Beanie in a pond in some woods.

On confirming which pond it turned out to be a pond in the woods along the hedge that we had pulled Tiga away from and although Tiga was probably going to take us to Beanie – the outcome would have been the same as it is believed she had been there since the night she went missing.