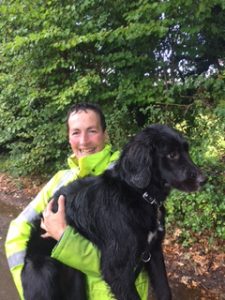 Libby was a young retriever collie cross that had recently been rehomed after spending the first few months in a shed. She was just going to be taken for a walk with owners other Labrador. Both dogs were on the lead as they were coming out of the front door when Libby got spooked and bolted with the extending lead attached. She had been missing for three days and no sightings before Tiga was called out to track.

Tiga picked up the scent in the opposite direction to which she was believed to have travelled. We ended up on the busy A21 where Tiga was on a very strong scent which was quite scary with the fast traffic but at this point there was no stopping Tiga. Half way along this road Tiga crossed over to the other side and continued along the A21. At the top we branched off into a trading estate and dropped down into some woods and along a footpath following a stream. We came up out of the woods to a McDonalds where we stopped for a well earned rest and portion of chips and Tiga enjoyed some well deserved cuddles from the manager.

Soon after we carried on around a car sales yard and dropped steeply down a bank into some more woods and along a footpath eventually crossing over the stream by a bridge and up into a small housing development and up back onto a busy road where we called it a day after eight hours of tracking. It was  now the rush hour and Tiga was finding it hard to find the scent with all the diesel fumes.

On returning home and looking at google maps I could see the natural direction from the way Tiga was going and where the owners lived, that the obvious course for Libby to travel from where we left off was through some woods, out onto the A21, crossing it and down a farm track which backed onto woods at the back of houses where Libby lived.

A few days later and no sightings there were reports of barking in the woods by the farm! The barking was heard again the next night and again in the morning. So I knew exactly where this was and put on some old clothes and left Tiga at home as the terrain was quite steep and very dense, to go and join the search!

After a walk round the area with no luck, we stopped for a coffee and then I was determined to search until I found Libby, so we returned again to the area with a couple who had also heard the barking. I persuaded the team party to carry on searching that area as I was convinced Libby was caught up by her lead and it also tied up with being across the other side of the A21 and down the farm track to the farm.

The team split but I knew where I was going and I struck lucky – up the steep bank again and in the dense hedgerow on the edge of the farm – there she was. After seeing that there was no way she was going to move as she was well and truly caught up I called back to the owners to say I had found her and I carried on up to comfort her.

Chris the son was first to arrive and managed with great difficulty to release her – she had a stick caught in her collar but otherwise seemed ok. After freeing her we had to cut our way through the hedge to the farm and took it in turns to carry her to safety.

She was soon in the car and off to the vets for a check up and a  number of ticks removed. 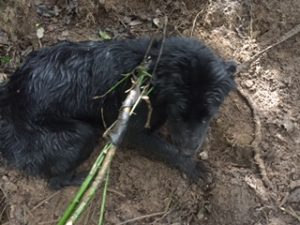