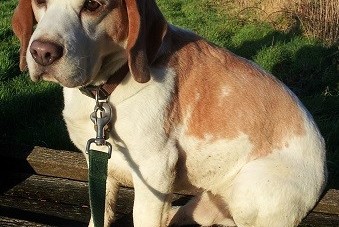 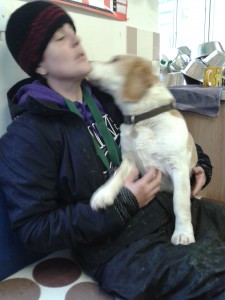 Hooligan an aptly named beagle was enjoying his daily walk in Ashdown Forest when he decided to chase some deer and failed to return. After three days we went to help and started the tracking at the last sighting where Tiga picked up scent quickly but then seemed to follow deer foot prints for quite some way eventually taking us to a clay brick works where the deer prints were still very evident but instead of a herd of foot prints there was now just one – so presumably one had been parted from the herd by Hooligan. This was not a place to be after dark and so we called it a day.

After another sighting we returned in the morning and tracked from this new point but Tiga was not interested and wondered why we were there. We met the lady who had seen a tan & white beagle on roadside enjoying some road kill and was convinced it was Hooligan. She stated that there was no collar on the dog which she saw clearly from horseback. We later learnt that nearby was a farm with  four  beagles, one being a tan & white that was always wandering out. This was also confirmed by a farm worker who said their beagle was still out.

With no other options we decided to return to the place where Hooligan first went missing and start from scratch and no sooner had we done this we had a call to say that a tan & white beagle had been picked up and was at the local kennels – was it Hooligan or was it the wandering beagle from the farm. We raced to the kennels to be greeted by one very happy Hooligan none the worse for his adventure and still wearing his collar.

This was a case of not tracking Hooligan but confirming that the sighting was not Hooligan.