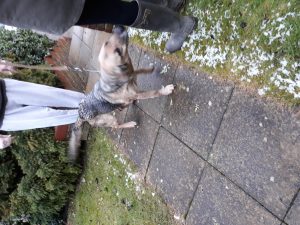 Tia – tracked by Tiga and then Yogi

Tia’s owners were celebrating a family graduation and Tia was being looked after by another member of the family in an area she didn’t know but she decided she didn’t want to miss out on celebrations and so when the opportunity arose Tia got out and legged it scared 8 days ago.
The first sighting was on the M20 motorway where miraculously she crossed all the lanes to the other side with lorries slowing up to avoid her.
We couldn’t track on the motorway and weren’t able to find out the exact location, so we had to wait for any news.
We had a number of vague sightings and Tiga did his best to try and pick up the route which he did but we had everything against us with the weather.
Tia had gone missing in an area she didn’t know and was travelling in the wrong direction and she was travelling and travelling fast.
We then had a more positive sighting albeit close to the M20 and the busy A249 and Tiga went straight back to track and yes picked up the scent but we had to call it a night.
The next morning after more snow and a big freeze Yogi took up the challenge and started to piece together Tias route which resulted in a sighting where Yogi had tracked.
We immediately went back out in the blizzard last night but were forced eventually to call it a night well and truly frozen and wet.
Confident we were not far behind Tia now I made the decision to call off the search which had been planned for today and after a discussion as to where we were going start tracking this morning – we set out and got a call to say she had just been seen at the exact place we were off to start tracking .
Yogi was straight into action being told Tia had gone down beside a drive but no, Yogi was having none of it and went up the path of the next house to the door and back out again – the hearts of the owners sunk as Yogi had taken no interest in where she was supposed to have gone but continued to do his own thing.

Yogi then went up another garden path and as he looked across the garden – I also looked at where he was heading. I saw what I at first thought was a garden statue of a dog – but then, I quickly realised it was Tia so the plan was hatched to catch her and Tia very quickly realised she was safe with her loving mum and dad.
It was a challenging week but at no point did I think we were not going to find her safe. I am not sure Liz was so confident.

So all the freezing fingers and toes, tracking in snow blizzards – losing the scent where the snow melted.
Yogi you are a little hero – you froze as well but didn’t give up.
Tia is safe!