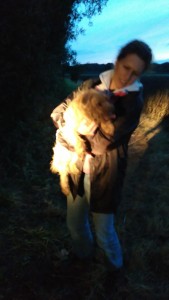 Coco a six year old Grizzly Border Terrier that loved to chase foxes and decided that while off lead on a walk she would do just that.

Twenty four hours later there was no sign of her and a friend of mine who was also a mutual friend of the owner asked if I could help.

Off we went and after a sniff of the blanket Tiga set off to find Coco. It was not an easy task as Tiga had all the scents and trails of twice daily walks in the area but it seemed Tiga eventually found the last walk and continued across fields and across ditches to a pond which we circled and then Tiga just sat down. As i looked at Tiga I heard a strange little noise and then some muffled barks.

I went off through the brambles to a fox hole and listened and could clearly hear a dog barking down the hole. It had to be Coco and it was.

We called the fire brigade and the local hunt for some advice and in no time both were on the scene digging. Coco was soon hauled out and on the way to the vets but apart from a few minor scratches and dirt in the eyes – Coco was on her way home.