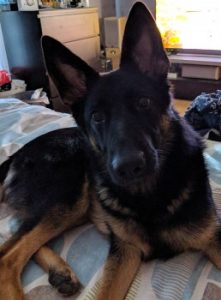 Alanna a young 11 month old German Shepherd had an unfortunate incident while being walked with owner and was spooked and ran off – there were reports of her being hit by a vehicle but the location was unclear but she was seen running fast along a road and no sign of her since.
Tiga went to track her and he found her lead and broken collar, so we now know the location where she was hit by a vehicle but as yet Alanna was still missing.
Tiga continued to track and tracked along a main road and then off into a housing estate and out the back of that to an old private hospital.

From here Tiga tracked across open fields and into an area very close to where Alanna had been walked and onto a footpath that led home. It was getting late and so we decided to follow that footpath home to lay a trail in case Alanna picked it up. Along that path Tiga had shown interest off to the left but we carried on along the path.

The following day there was to be a big search by locals and friends but just as the search was due to set off – the owners had a call to say that Alanna had been secured safely in Chessington Park by staff – this was a few hundred yards from the footpath we were on and in the direction Tiga had wanted to go.